It was a wild and windy day in  Cambridge last Sunday, as the remnants of tropical Cyclone Dovi hit the North Island. In total, the MetService issued 17 severe weather warnings, while many parts of the North Island lost power.

At Marije and Richard Banks’ blueberry orchard in Monavale, the damage was particularly extensive—and up close and personal.

As Richard told the story, the family got home from the farmers’ market at around 1pm on Sunday afternoon. The wind was already “massive” and ruffling some trailers. Richard soon got to work tying them down—just in time to see the orchard’s entire tunnel house lift six to seven metres in the air.

“It just lifted up like a big sail,” Richard remembered. “I told my wife to … run and I wasn’t going beat it, so I just stayed there and it ended up landing about two metres in front of me.

“It was pretty scary, but it’s just mother nature at her finest,” Richard said.

The tunnel house is about 100 metres long and  50 metres wide.

“The structure it was absolutely…decimated,” Richard said.

The family will have to peel the plastic from the tunnel house off the plants it’s encompassed—lest they burn.

Half of one of the tunnels was thrown by the wind into about four rows of blueberries, destroying bushes. Likewise, the bushes under the tunnel house themselves are, as Richard put it, “pretty much stuffed.”

“There’s not going to be much left that’s usable,” he said.

The unexpected direction of the wind likely played a role in the tunnel house’s demise, Richard explained. 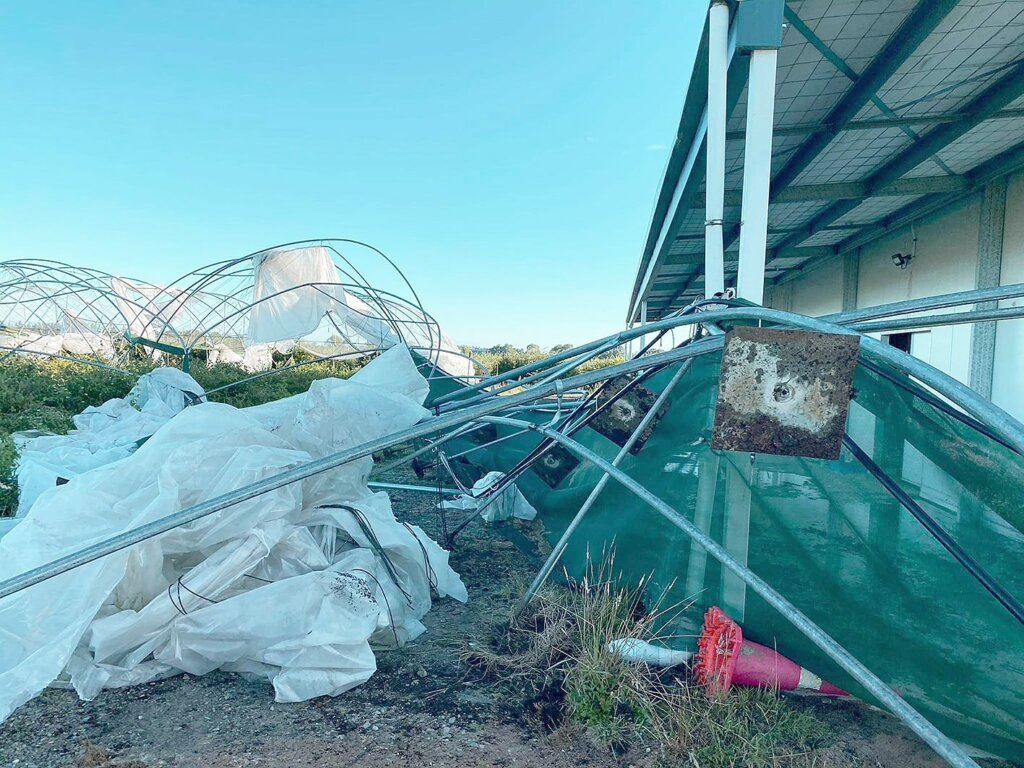 The wreckage of the storm

“We’ve had wind before; but this was a westerly—supposed to turn southerly. Our tunnels face north/south so a southerly would’ve gone straight through the centre of them no problem. This storm stayed as a westerly which hit [the tunnel house] side on.

“It hit it broadside, got into a bit of ripped plastic or whatever and turned it into a great big sail—700 metres of great big sail,” he said.

“But it’s Mother Nature, you know. You’ve just got to embrace her.”