Belfield on fire in America 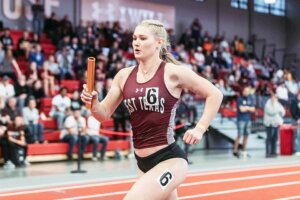 Catch me if you can – sprint ace Leah Belfield.

The 21 year old excelled in conference finals last month to quality for the USA NCAA division 2 finals in Pittsburg.

During the Conference event she scored a7.42s 60m time on the indoor track and eclipsed a national record set by Kim Robertson in Paris 37 years ago.

The NCAA finals take the top 16 to 20 athletes from across America to a round of heats and finals. There are approximately 460,000 athletes spread over 2000 Track and Field teams across America.

The finals had eluded Belfield  – a straight A student – in her first two years at West Texas A&M, primarily through Covid, due to cancellations and then limitations on numbers – so to finally get there was a big deal.

On the opening day Belfield sent a message to her rivals by dominating both of her heats – setting another New Zealand record in the 60m running 7.41 and securing second qualifying spot, and then 23.95 in her 200m to secure top spot. The following day she closed the gap on the top qualifier in the 60m and finish second, just 0.04s behind, and established yet another NZ record of 7.40. Then an hour later she had a nervous episode with the 200m final. Raced as timed finals with two races of four athletes, seeded after the heats. In theory the top four were in her race, however because of a disqualification and then reinstatement of an athlete in the heats one of her main rivals was in the first final.

That athlete laid down the gauntlet running 23.95s on the difficult flat surface  – indoor tracks are usually 200m round with banked bends but this track was 300m and flat.

Leah started strongly in her final soon making up the stagger outside her but as they entered the bend things tightened up before she exploded off the bend to win the second final. She then had to wait for the time which soon popped up us 23.93 – enough to become the National Champion of America.

Her former coach and mentor, Te Awamutu club president Murray Green, on the phone later Belfield discussed the difficulty she had running on the track.

The usual one lap 200m had taken some getting used to but this time they were starting on a straight and had to go all out for 40m before effectively coasting around the bend to maintain control before surging to the finish.

“She was elated with the outcome, which was beyond her wildest dreams when heading to America on a Scholarship three years ago,” Green said.

Belfield is now looking forward to the outdoor season which starts immediately.

“It was an incredibly proud day for her parents, Alan and Karina Belfield, sitting at home on the family farm in Arohena.” Green said.