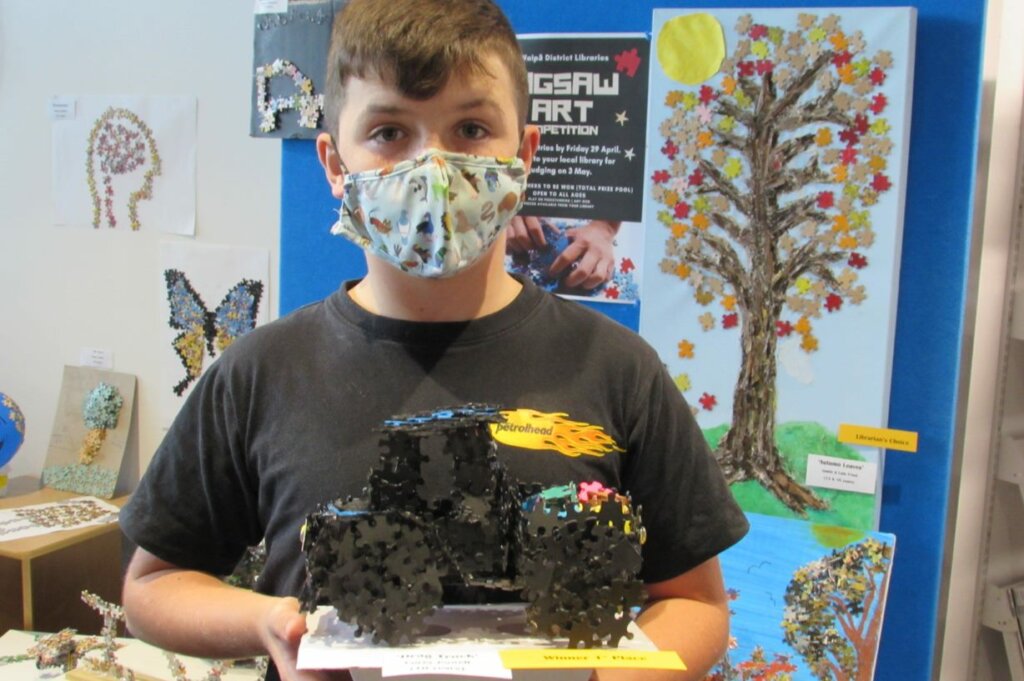 Corey Powell won in Te Awamutu with his drag truck.

A new competition run by Waipā District Libraries during the April school holidays found a clever solution to the problem of jigsaws made maddeningly frustrating through lost bits.

‘Jigsaw Art’ ran across both Cambridge and Te Awamutu libraries, combining their usual April holidays art theme with one using jigsaw pieces from incomplete puzzles. It called on contestants in both towns to recycle random jigsaw bits into something creative and original.

Dee Atkinson, Waipā District Council’s outreach librarian, said the uptake had been great, with 27 entries coming in across the two libraries. Judges were brought in from outside the libraries.

The Cambridge competition was won by the Hawkins siblings, Jessica, 6, and Mason, 8.  The pair decided to make a ‘library’ out of their pieces, with Jessica telling staff on receiving their voucher that they wanted to “make library staff happy” with their creation. Cambridge siblings Jessica and Mason Hawkins with their winning entry.

The Te Awamutu competition was won by Corey Powell, 10, who created an outstanding drag truck with his pieces.  There were also runner-up and youth prizes awarded.

Next up at the libraries is a competition to design a slogan or design for a t-shirt that will fit with upcoming Pink Shirt Day.

“The winning entry in each library will have their design made up into a t-shirt,” said Dee.  “Entries are due on May 19 for judging on May 20, which is Pink Shirt Day.”